It's All About Leopard!!! 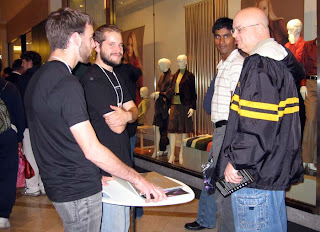 Leopard is here… my husband and I spent a romantic Friday evening at the Apple Store. Not to buy Leopard mind you… oh no, we just wanted to be part of the fun! Our family copy of the new Mac Operating System, Leopard, was actually sitting on the kitchen table while we were out partying at the Apple store with other Mac fans… waiting patiently for us to return and install it! My husband had pre-ordered the system from Apple and it was in his hands by 10:30 Friday morning! Woo-hoo!
Leopard is up and running well on our Mac desktop. It is pretty aweso 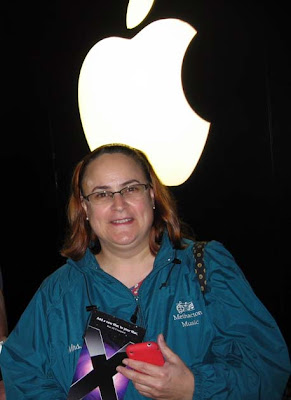 me. I love cover-flow with all the files on my hard drive. Way back when we had the Apple II GS we made cute character folders for our children, it is interesting to see them scrolling by… since the rest of our file folders are just boring old file folders!
Do I have Leopard on my computer yet? No. And, to tell the truth, I am not sure I am putting Leopard on my old PowerBook G4. I have just the amount of memory required to handle the new operating system and I am worried that my old slow baby laptop (it is the 12 inch Powerbook G4) won’t be able to handle the new sleek, fast, powerful Leopard! Time to get a new laptop! "-)
Anyway, it was fun to be part of the experience at the Apple Store. Of course, I also was longing for the days when Apple gave away their new operating systems for free! Yes, Apple was different in those days. My family and I would sit patiently at the Apple User's club in Kaiserslautern, Germany waiting for the disks to be passed out to members. In those days back in the mid 80's to early 90's Apple used it's registered user's clubs to distribute new updates and pass out new information... of course those also were the days when only the US military was using the Internet! The Kaiserslautern Apple Users Group met once a month (looks like they still meet). Of course now we virtually get our Mac news from Cali Lewis and Leo Laporte. Hey, the Kaiserslau 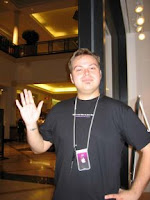 tern Users Group even have a podcast! We met at the Hacienda Mexican Restaurant from 1 to 3 on Sunday afternoons. The owner of the restaurant was a big Mac user and his restaurant is now an Internet Cafe as well. He runs the entire business with Macs. He was our hero.
I remember the day the sad announcement was made at the user's group that Apple would no longer be giving away new operating systems... and Friday night at the Apple store I had come full circle and again was partying and celebrating a new operating system release, not for free but still fun!
Special Thanks to Alex, from the King Of Prussia Apple Store... he told me about Apple Teach... one-on-one weekly sessions to teach all things Mac. I need to learn to use Final Cut Pro.

Posted by Congerjan at 4:26 AM

The fifth grade class is writing Haiku. My daughter brought up the beautiful, tall sunflowers that used to grow on the bike trail across the street from our house near Stuttgart, Germany. Those sunflowers are a beautiful childhood memory for her. So, here is a haiku in tribute.

Haiku is so much fun because it can help you remember something and yet is so simple that it does not take too much time to write. This haiku reminds me of my daughter as a little five year old riding her tricycle to the park and the sunflowers towering over her head. What kind of memories do you have? Can you haiku?
Posted by Congerjan at 12:52 PM