I was supposed to get a new computer for Christmas. But I decided to hold off until the announcements Apple made at MacWorld. Was I disappointed? Of course! At MacWorld Apple announced the MacAir. What I was hoping for was a 13 inch MacBook Pro. The computer I currently use is a 12 inch PowerBook G4. It is a workhorse even at its advanced age. And, I wanted another workhorse in a small size! In my mind the MacAir is a lightweight but it does have some features that I wanted, like the touch pad and backlit keyboard. It would be great to take to a conference or on a trip but to replace my only computer, it was not an option. Yesterday, Mac announced a couple of things. First they finally made a 13 inch MacBook. There was my 13 inch that could replace my 12inch workhorse but again, the computer did not seem as much like a workhorse as my current baby computer (did I mention that I have worn the keys off the computer) . I probably could have gotten away with one of those but then I looked at the new MacBook Pros. I was hooked. Not only does it have the backlit keyboard and the touchpad, I could get a glossy screen and a 250 gig hard drive. When my husband ordered my PowerBook G4 he made 2 upgrades to memory and it has a whopping 80 gigs which of course I have filled to the max. The only compromise I had to make was that the computer is 15 inches not 13. So, I am getting a slightly larger computer than I wanted. I ordered my computer last night and now I am sitting on pins and needles waiting for it to be delivered. Oh, one more thing, Steve Jobs, don’t announce a 13 inch MacBook Pro next month or I will cry!
Posted by Congerjan at 8:57 AM 2 comments:

While trying to catch up on my EdTech list-serve reading I came across a post that told about some free tutorials to learn Microsoft Office. These tutorials come from Bernie Poole who is an Associate Professor of Education and Instructional Technology at the University of Pittsburgh at Johnstown. Did I mention that these tutorials are free and did I mention that Bernie is a member of the EDTech list-serve? Well, it is free and he is, and he has done it again. This time he has put up tutorials for Office 2007. It’s called Essential Microsoft Office 2007: Tutorial for Teachers. Check them out!
Posted by Congerjan at 10:30 PM No comments:

Is it Web 2.0 or are we turning into Educaterers?

I first heard the word Educaterers while watching the 1951 movie, “Goodbye, My Fancy”, staring Joan Crowford and Robert Young. Crowford is journalist Agatha Reed returning to her alma mater for homecoming, but if the truth be told, she never really graduated. Apparently she and Young, who is now the college president, were caught in a compromising position and Reed left before graduation rather than expose Young. Reed wants to rekindle the romance but finds out the college president has made a few too many compromises and has turned into an Educaterer, one who thinks students need puff and fluff rather than the true knowledge needed to make them think for themselves.

I have not seen this movie in years but its themes are constantly on my mind as I examine my own pedagogy. Recently I have been considering the term Educaterer because it seems that students are no longer taught to think for themselves. Do I prohibit them from doing so? Am I turning into an Educaterer? Am I giving them the tools they need to succeed? Am I demanding excellence? How do I tell if they are equipped for the future? Am I properly molding the next generation, the next electorate? What will be important for them to know when they graduate and go out into the market place for a job? I had a college dean tell me at a technology conference that I was not preparing students very well at all. He actually was speaking to everyone in the room but it made me start thinking.

He told of several students in an astronomy class not knowing the difference between a planet and a star and not knowing the names of the planets. Forget about Pluto being demoted, students are leaving our K-12 schools and don’t know the names of the planets in our solar system? Does that mean I am an Educaterer? I am not so sure. What I am thinking is that children are being bombarded with information. There is too much information out there that it is impossible for them to remember it all. Even Einstein didn’t remember everything. But he knew where to look to find the information he needed when he needed it. As a librarian, I can teach students where and how to find the information they need to know. I can get them so comfortable with searching that they can find information easily. I can make a difference in their lives by equipping them with technology tools and teaching them how to use them. Educaterers spoon-feed information. I am not an Educaterer. I am a librarian. The difference is that I show students where and how to find useful information and then teach them how to extract the good parts, so they have the information they need when they need it. I can also show them Web 2.0 tools that will enhance their education, not spoon-feeding but technology enhanced education. Finding and using information is not Educatering!
Posted by Congerjan at 1:22 AM No comments:

Special thanks to Kristin Hokanson of "The Connected Classroom," who asked Steve Dembo of Discovery Education, for his permission to stream his Tuesday keynote for those of us who only attended one day of the conference. A two hour delay morning allows lots of time for recharging batteries. Please check out Steve's keynote on UStream.TV.

I can't wait to check out Curricki.
Posted by Congerjan at 12:46 PM No comments: 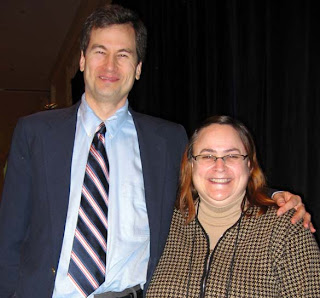 So, I am finally getting to blog about this thanks to a two hour delayed school opening. I took a personal day on Monday and paid to go to one day of my state’s technology conference. Why you ask. Well, simply because the best technology journalist in the country was the keynote speaker on Monday and I got to meet him. Am I gushing? Come on, he's from the NY Times! I used to be a reporter and now I am a librarian. I know how tough it can be out there establishing contacts to get the best stories. And, this guys has the contacts, gets the best stories, and gets them right. I could not wait for my fellow educators to hear his view of technology.

I have been a big fan of David Pogue for a while and now thanks to Pogue’s inspiring keynote so is the technology coordinator in my school. In fact, my tech coordinator took this picture of me with David. I am such a technology geek. But you know how it is, you read someone’s blog, read their column, and listen to him or her on various podcasts for so long and you feel you know them. (Sounds like what used to be said about television.) And, David Pogue gets it. He knows people know him from the web and he’s OK with that. He is friendly and besides, he appeared on Cali Lewis’ podcast, he actually met Cali! And, if Cali gets her mobile home and travels around the country like she and Neil are planning, she may get somewhere close enough for me to meet her too, podcasting from the road, it doesn’t get much better than that! Anyway, back to David Pogue’s keynote… it was enlightening as well as entertaining. He changed the words of “My Way” and sang about the iPhone and really nailed it about the cool factor. It is cool to have an iPhone! But more than that, he told this group of educators what the future looks like.

He called his presentation, “The Digital Generation Grows Up.” The first two things he says will mark the future are Internet phones and wireless everywhere. First, he sees landline telephones going away as more and more people use voice over IP or the Internet as a phone. T-Mobile was the first to introduce wireless cell plans that include free calling when in a wireless Internet hot spot. This goes hand in hand with his second biggie, he foresees wireless Internet everywhere and more collaboration on a worldwide stage because of it. And, of course all-wireless Internet phones like the much hyped currently vapor-ware Google Phone. He pointed out that just those using VOIP now have driven down the cost of landline calls by 30 percent.

The next thing he anticipates is a greater expansion of Web 2.0 but not without challenges, as more and more people supply content to the Web. He wanted teachers to tell their students that once things are online, they are there forever and they don’t stay where you put them. He also put a plug in for copyright because a college survey showed him students think everything on the Web is free and out there just for them to download. He realizes the question of legitimate sources is a real one and he’d like to see a code of ethics for bloggers. So, David Pogue gets it, he knows what librarians are saying is true. Our new library standards include ethics and bias. So maybe the best thing we can teach our students is to judge for themselves (Is that not what we are doing when we give them an Internet evaluation form?) what is worth reading and a little discernment.
Posted by Congerjan at 9:26 AM 1 comment:

The guilt of blogs...

Ok, so now I feel better. Will Richardson can't keep up with his RSS feeds either. He said so, right on his Weblogg-ed page today! Sometimes it feels like there is way too much stuff out there to read. I too feel guilty when I fall behind on my reading of my list-serves and the blogs I like to keep up with. Most of the blogs I like to read are listed on this site but there is nothing so frustrating as going to my aggregator and seeing all the unread posts. Who is making me feel guilty about this? I am. It is the same thing with books. I should be wearing the shirt I recently saw in a librarian's magazine..."So many books, so little time..." Now I can add to it, "So many blogs, so little time..."
Posted by Congerjan at 6:28 PM 1 comment: