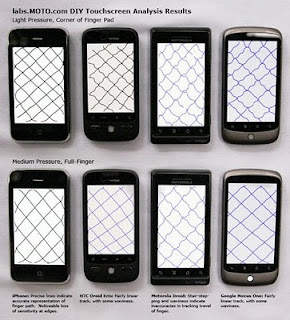 I am very hooked on my iPhone. I would not give it up for anything and now it looks like I won’t have to because iPhone won the touch screen quality test. The link above and photo to the left will lead to the article by the Electronista Staff about how great the iPhone responds to the lightest touch.

The only way Apple can do better is if they introduce their much anticipated tablet PC later this month. The computer is rumored to be called the iSlate. It is supposed to be 10 inches. A slate computer in my opinion would change the face of education. It would make e-books more accessable to students and change libraries forever.

I for one hope all the rumors are true. Can't wait for Apple's announcement that is supposed to happen later this month but it is unclear if it will be January 26th or 27th. I have heard rumors about both dates. January will be a big month for announcements, the Newbery, Caledcott, and Dr. Seuss awards will be announced at the ALA Mid-Winter Meeting, January 15-18 in Boston. Enjoy your January announcements. I know I will.

Posted by Congerjan at 7:36 PM