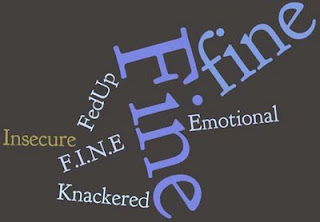 Someone in my Personal Learning Network (PLN) was complaining the other day because in response to a perfectly reasonable request his or her teenager got angry, slammed bedroom door and said, “Fine.” If you have ever heard a teenager use that word in that tone, you know that they are not using the word fine the same way you do when someone asks you how are things going and you say, “fine.” Totally different! And, leave it to the British component of my PLN to explain it the way her mother would! Not even sure which British friend it was but she said her mother defines fine as: “F.I.N.E.: fed up, insecure, “k” nackered, and emotional. And that my friend totally explains the attitude and tone of the word when it is spit in your direction! I now admit that I had no idea what “k” nackered meant, so I had to look it up myself and learned from Wiktionary that it means extremely tired or exhausted. So, now you know too. When your teen, student, child, or spouse says they are “fine.” They could mean something totally different than the word implies!

Wow! The power of our PLN! Thinking of F.I.N.E. as an acronym, does seem to make it much easier to understand and not personalize. Thanks! I love to hear about such stories.

This is a GREAT story!! I just shared it with a co-worker and we both had a great laugh about it.