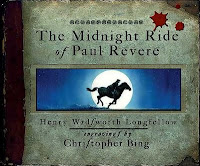 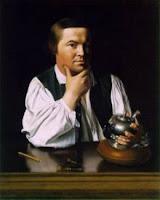 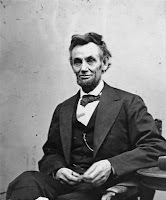 My school library was one of the lucky 26,300 schools and public libraries that were selected to receive the first round of “Picturing America” awards presented in cooperation with the American Library Association (ALA) Public Programs Office, as an initiative of the National Endowment for the Humanities (NEH). In late September I received 20 double-sided, laminated posters of great and I do mean great American artwork, which I displayed in the library throughout the year. In February we did a picture study and read books about Abraham Lincoln and George Washington for their birthdays. Using the posters of Washington and Lincoln made the lessons come alive. The photo of Lincoln (left) constantly amazed students; they could not believe how many wrinkles he had. One student said to me, “Wow, he must be really old, is he still alive?” I am quite used to the “is he still alive” question from my kinders, but in this case the student added, “because my grandfather has wrinkles and he’s really old.” I am sure grandpa would blush if he heard that but Lincoln’s wrinkles were more from the worry of war than from age alone. This Alexander Gardner photo does capture Lincoln’s deep worry when the burden of the presidency had taken its toll. Glad my student picked up on that.

There has not been enough time to use all 20 of the illustrations but this month, in honor of Paul Revere’s April 18th ride, we studied about Paul revere in depth. We used the pictures and studied details of Grant Wood’s whimsical painting. We discussed the lights being on even in some of the darker parts of the picture because Paul Revere had already been there and people in the houses were awake. But, the lights were still out where he hadn’t been yet. We looked deep into Paul Revere’s eyes in the portrait painted by John Singleton Copley. The students decided Paul Revere looked like Jack Black and that began a very lively discussion of Paul Revere’s character. What if Paul Revere had Jack Black’s personality? We turned the picture around and looked at the teapot Paul Revere made that is at the Metropolitan Museum of Art. We watched some videos from United Streaming. We read several books we already had in the library and then last week a box of books arrived in the mail. My school library was awarded the We the People Bookshelf, a collection of classic books for young readers. The books are beautiful, some have reproductions of original documents. The bookshelf is also a project of NEH in cooperation with ALA Public Programs Office. In the collection was a wonderful book with the Henry Wadsworth Longfellow poem, “The Midnight Ride of Paul Revere” with beautifully illustrated and engraved pictures by Christopher Bing. There were two reproductions in the book, one being the sworn deposition of Paul Revere about his now famous ride. The students had a wonderful time comparing the real events with the Longfellow poem. I realize I may seem a little over enthused about these wonderful books and illustrations but I am only half as inspired as the art teacher in my building. We are now trying to come up with a building theme for next year wrapped around the theme of “Picturing America.”